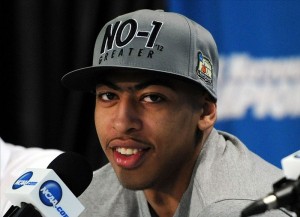 New owner, and now a new star player. The future suddenly looks bright for the New Orleans Hornets.
Meanwhile, it was yet another loss - in a historic season full of them - for Michael Jordan and the Charlotte Bobcats.
The Hornets, recently sold by the NBA to Saints owner Tom Benson, won the NBA's draft lottery Wednesday and the No. 1 pick overall - which they almost certainly will use to pick Kentucky star Anthony Davis.
At least that's what the consensus college player of the year is expecting. Moments after the Hornets won the lottery, Davis said he was looking forward to playing professionally in the place where he led the Wildcats to a national championship in April.
The good news for the Hornets comes after a difficult season in which they traded All-Star Chris Paul and a couple of years in limbo where they couldn't do much to upgrade the roster while the league was looking for a buyer.
''Just a first step for us to winning it all,'' Benson said in a TV interview after the lottery.
The Hornets moved up from the fourth spot, where they had a 13.7 percent chance, to earn the pick.
''Everything was surreal once they announced the fourth pick,'' said Hornets coach Monty Williams, who represented the team on stage. ''I said `This is pretty cool.' I knew my wife and kids were home praying that things would go well and they did.''
The Bobcats, after going 7-59 for the worst winning percentage in NBA history, fell to the No. 2 pick. Washington will pick third and Cleveland fell one spot to fourth

Associated Press.
Posted by HBCUX at 3:51 AM