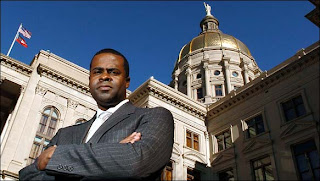 The Mayor of Atlanta Gives HBCUs His Endorsement

Please click on the above interview link "The Mayor..." where the honorable Kasim Reed, Mayor of Atlanta Georgia, gives HBCUs his endorsement for future activities and efforts toward better education and making leaders.

Since taking office, Reed has worked to improve public safety, create new opportunities for youth and restore financial stability. Prior to his election, he served for 11 years as member of the Georgia General Assembly. He was first elected in 1998 as a State Representative and served two terms. He also served in the Georgia State Senate, where he was vice chairman of the Senate Democratic Caucus. As an undergraduate member of Howard University's Board of Trustees, he created a fundraising program that has contributed more than $10 million to the school's endowment. Reed was appointed Howard University's youngest General Trustee in June 2002 and remains a member of the Board of Trustees. Reed grew up in the Cascade community of Atlanta. Six other distinguished alumni, including Academy Award-nominated actress Taraji P. Henson, will be recognized at the Charter Day Convocation and awarded Distinguished Postgraduate Achievement Honors at the 87th Gala Dinner on Saturday, March 12. The special awards honor graduates who have achieved distinction in their respective professional fields.
Posted by HBCUX at 9:56 AM