Serena Williams upset in the first-round 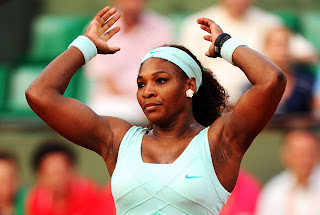 Serena Williams lost in the first round of a major tournament for the first time in her career, falling to Virginie Razzano of France 4-6, 7-6 (5), 6-3 Tuesday at the French Open.

The fifth-seeded Williams was two points from victory nine times in the second set, including leading 5-1 in the tiebreaker. But Razzano won six straight points to force a third set, then took control of the match.
''I made so many errors today, which isn't the game I was playing in the past,'' Williams said. ''That's life.''
Williams entered the day with a 46-0 record in first-round matches at Grand Slam tournaments. She had been looking for her 14th major title and second at Roland Garros.
On clay this year, Williams was 17-0 heading into the match with two titles, but she pulled out of her last match in the semifinals of the Italian Open with a bad back.
''I didn't feel anything abnormal,'' Williams said Tuesday when asked about the injury. ''I was 100 percent healthy.''
Razzano jumped out to a 5-0 lead in the third set, but Williams won two straight games before what turned out to be an epic 23-minute eighth game.
Williams had five break points in that final game.
''I was just thinking, 'If I can break here we'll be back on serve,''' Williams said. ''You know, those are the kind of things that are going through your head.''
Razzano saved all five, however, then converted her eighth match point to eliminate one of the tournament favorites.
''I had to dig deep against a great champion, and you could see until the end that she gave away nothing,'' Razzano said. ''I had to go and get the victory. I had to be mentally strong, and I gave my everything.''
Razzano's coach and fiance, Stephane Vidal, died about a week before last year's French Open. Razzano played anyway, losing in the first round.