3 killed, 3 wounded in shooting at apartment complex near Auburn University

Todd J. Van Emst / Auburn University via AP file
From left to right: Edward Christian, 20, an Auburn University student who was killed at a party late Saturday night; Eric Mack, 20, who was shot and is now being treated for non-life-threatening injuries; Ladarious Phillips, 20, who was among the three dead. Christian and Phillips were former football players. Demario Pitts, 20, of Auburn, also died.

By msnbc.com staff and news services
Three people were killed and three others wounded in a shooting during a party at an apartment complex near Auburn University, Alabama authorities said Sunday. Among the dead were two Auburn students who had been on the football team.
A manhunt was underway Sunday for suspected gunman, identified by police as Desmonte Leonard, 22, of  Montgomery, Ala.
The dead were Edward Christian, 20, a football player who was out this season due to injuries; Ladarious Phillips, 20, a former football player; and Demario Pitts, 20, of Auburn.
The shooting happened late Saturday night at the University Heights apartments, a large complex near campus where many of Auburn University's students and athletes live. Leonard is suspected of pulling a gun after a fight broke out, shooting six before fleeing, Auburn Police Chief Tommy Dawson said at a news conference on Sunday.
When police arrived, Christian was found dead on the sidewalk. Phillips and Pitts were transported to the hospital, where they later died.
Among the three wounded is John Robertson, 20, who is fighting for his life after being shot in the head, Dawson said at a news conference on Sunday afternoon. Xavier Moss, 19, was released from the hospital and Eric Mack, 20, was being treated for non-life-threatening injuries.
Police believe Leonard drove away from the scene in a white Chevrolet Caprice, which was later found abandoned.
"I don't believe it was targeted. It was a fight and someone got carried away," Dawson said of the shooting. "I don't like the word random when it comes to shootings, but it was a fight that obviously got out of hand."
Asked about connections to the football team, Dawson said, "The only connection to the football team is that they are the victims of a brutal shooting. Sometimes the young men get a bad rap, I feel, but they're the victims today."
"This is a sad, sad day for everyone associated with the entire Auburn family. I am devastated by the passing of three young men, including two that I personally knew in Ed Christian and Ladarious Phillips and my heart goes out to their families," Auburn coach Coach Gene Chizik said in a statement. "My thoughts and prayers are with their families and all of the victims involved in this tragic incident. Nobody should ever have to endure such unimaginable grief, and we will love and support the victims' families during this terribly difficult time. We have a lot of people on our football team that are hurting right now and we're going to do everything we can to help them get through this." 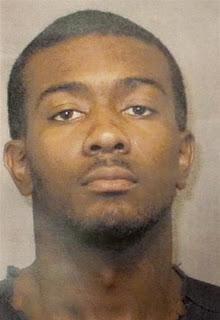 AP Photo/Auburn Police Division
This undated photo provided by the Auburn Police Division shows Desmonte Leonard, 22, of Montgomery, Ala., the suspect wanted for fatally shooting three people, including two former Auburn University football players, and wounding another three people during a party at an apartment complex near the school.
Turquorius Vines, 23, told The Associated Press he was at the pool party Saturday evening with one of his friends, Pitts. He said he and Pitts were approached by two other men who started arguing with them over a woman.
Vines said he punched one of the men, while Pitts hit both of the men over the head with a bottle. Either one or both of the two men then started shooting, he said. He said his friend was shot and killed, while two others also were hit by gunfire. Vines said he had never before seen the men who he had been arguing with.
"It's like I lost a lung," Vines said. "I don't know how I'm going to survive this."
Mack, the wounded player, is a junior offensive lineman from St. Matthews, S.C. He played in five games last season. Chizik said Mack was expected to make a full recovery.
Christian was an offensive lineman who was out last season while dealing with a back injury. Phillips was a backup fullback. Chizik said in April that Phillips had decided to give up football.
"We're deeply saddened about last night's tragic events that impacted the Auburn community and the Auburn family. Our heart-felt condolences go out to the victims and their families," Auburn University President Jay Gogue said in a statement. Please keep them in your thoughts and prayers. We're in constant contact with area authorities and will continue to assist in any way possible. Our attention is now focused on providing care and support to those touched by this tragedy."


Visit msnbc.com for breaking news, world news, and news about the economy
Posted by HBCUX at 5:53 AM