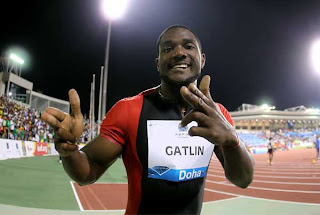 By Greg Couch of FoxSports.com

The basics of the typical inspirational comeback story go something like this: Athlete suffers, keeps faith, works hard, overcomes. And we fall for that every time.
It’s like the story of Tyson Gay, Olympic 100-meter sprinter. In March, following hip surgery, he still couldn’t even jog. On Sunday, he qualified for the Olympics. That would be so nice and neat, but for one thing: He finished second in the Olympic trials.
The winner was Justin Gatlin, who won gold at the Athens Olympics in 2004, then missed the Beijing Games. Now, at 30, he ran a 9.80, just ahead of Gay's 9.86, and is a serious threat to win a medal at the London Olympics.
But Gatlin is a new kind of comeback story for us: He has impressively returned this far after suffering from, a, uh, four-year steroid suspension.
“I’ve been tested multiple times since I’ve been back,’’ he said. “When I was away, I was still getting tests. It’s not about judging myself or whatever I’ve been through. I’m focused on what’s in front of me.’’
What he’s been through? Sure, he’s focused on the future, and the fans in Eugene were cheering for him when he was introduced. It’s unlikely he’ll get that reception in London, where he’s always going to be seen as a cheat.
This is a somewhat new thing for track and field. It went through its low points of Marion Jones and others, when steroid cheats disgraced the sport and went away. Then, replacements came in, and Gatlin was among the young athletes promising to clean up the game’s image.
Then he was gone. And now, in plenty of sports, actually, the suspensions are over for athletes, who are coming back to the games. In fact, just before Gatlin won his race, American LaShawn Merritt, back from his own 21-month doping suspension, won the 400 meters and a shot to defend his 2008 Olympic gold.
You’re going to have to decide for yourself how you feel about these guys. Alex Rodriguez seems to have been accepted back in baseball. But the mark is always there.
Gatlin says he never knowingly doped, and that a massage therapist must have rubbed the stuff into him. Whatever. He was out four years.
Contrast that to football doping cheats, who miss four games, or those banned in baseball, who miss one-third of one season.
Gatlin has served his time and also lost his big sponsors. He should be free to come back. But that doesn’t mean the slate is entirely clean. It can’t be.
“I’ve been through some dark paths,’’ Gatlin said. “What really has been able to help me keep my faith was the faith of my fans. Them believing in me, wanting me to come back, knowing I’m a true athlete, a legit athlete.
“I’ve been responding to emails, going to talk to kids, traveling, telling them the right and wrongs of life.’’
See? That just sounds a little off. Gatlin is talking to kids about right and wrong. He might well be doing everything right, everything he can to rehab his image. But that can go only so far.
With sports, the one thing that does tend to fix an image is success. Gatlin has a chance to compete again for the U.S. And it’s a sport dominated by Usain Bolt and the Jamaicans.
Gatlin already has started a bit of a feud with Bolt through the media. He said he thought that Bolt was beatable, and Bolt responded that Gatlin needed to get by a bunch of other runners before setting his sights so high.
Maybe so. And maybe Gatlin, in getting past Gay, has gotten to the top of the game again.
At least, the top of the game under Bolt.
“I don’t think I would come back to a sport where I would be OK with getting second or third,’’ he said. “We (the US sprinters) all have our eyes on the prize, wanting to get the gold. If that’s the Jamaicans in our way, the whole world in our way, that’s OK. Go around them and get the gold.’’
His comeback has been incredible, actually. The money stopped coming in, and he gained weight for a try at getting into the NFL. His confidence was shot. So was his technique.
He talks about some blog writing, when he started to come back, that he looked like a pro wrestler in a unitard. Some race officials didn’t want him in their meets.
Those were the hard times for Gatlin. He kept the faith, worked hard and overcame.
A modern day comeback story, I guess. It doesn’t feel quite the same.