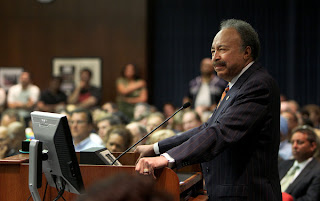 UPDATED June 18, 2012
HAMPTON — City Council members will support a request by Hampton University President William Harvey to hire a consultant to create a plan to revitalize the downtown area.
Harvey outlined his proposal to the council on Wednesday night, his first public comments about the project since taking a lead role in the effort last fall.
"I don't just want to get a report about another part of our city," he said. "I thought the thing to do was to look at this in a holistic approach and that is what we'll do."
Harvey has spent about nine months assembling a 24-member board, Hampton First, that will lead the project. The board includes pastors, real estate developers, bankers, artists and small business owners.
HU's president said the group will take community input and use those ideas to help guide consultant Sasaki Associates. He's asking for $280,000 from the city to hire the Boston-based planner to create a new master plan for downtown.
City Council member were overwhelmingly in favor of Harvey's proposal.
"If we are going to be successful, then we need to hitch our wagon to the things he's doing," Councilman Donnie Tuck said.
Tuck said that even though he aims to closely watch the city's funds, he is excited about Harvey's proposal.
Harvey agreed last fall to lead the downtown redevelopment project after Steiner+Associates, of Columbus, Ohio, published a report outlining challenges Hampton will need to overcome and goals it will need to achieve to increase tourism and business development.
Harvey said he wanted to use the Steiner report as a springboard for the Hampton First board, whose members are participating as volunteers.
Sasaki is already creating a master plan for Fort Monroe, and has been hired by the city to update the Phoebus and Buckroe master plans. Revamping those neighborhood plans is expected to cost the city about $250,000 each. City Manager Mary Bunting said the money to hire Sasaki will come from money from an account originally earmarked for a private development that never materialized.
A report distributed by Harvey outlines Hampton First's vision for downtown that includes opening the waterfront to the public by relocating buildings, developing an aquatic theme and hosting more water-based events such as sailing regattas and boat shows.
Public transportation could also take downtown visitors to neighboring communities such as Coliseum Central, Phoebus, Fort Monroe and Buckroe.
"We would like for Hampton to be an urban waterfront destination with a particular interest in weekend and summer activities," wrote Harvey in a report.
The report calls for the downtown experience to include areas to walk along the waterfront, a central facility with indoor and outdoor seating and a grocery store offering organic foods. Other proposed attractions include an artist marketplace, clothing stores and a pirate museum. Hampton holds the Blackbeard Pirate Festival annually.
At the Wednesday evening meeting, Harvey emphasized that plans are preliminary, although there are short term goals that could be achieved within a year.
"Some people say I'm a pusher, and I want to push them to get started this summer," said Harvey of Sasaki.
The master planner will have a mound of past consultanting work to add to. Last fall, Peninsula Town Center developer Steiner+Associates created a report outlining the strengths and weaknesses of Hampton and the impediments to redeveloping downtown. The existing master plan for downtown was put together by Urban Design Associates, of Pittsburgh, Pa., in 2004.
"We're talking about making this one of the loveliest villages on the East Coast," Harvey said."We can't be all things to all people, but we sure can do good things here."
Consultants' ideas for downtown
Copyright © 2012, Newport News, Va., Daily Press