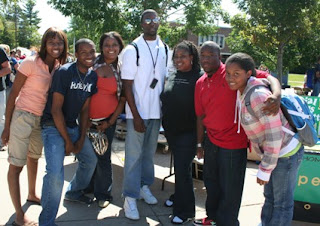 
There’s plenty wrong with Black America’s media agenda. Our most prominent figure in cinema and television rose to prominence through cross-dressing, Bible-thumping and gun-toting. The only thing shrinking faster than newsrooms across the nation are the number of African-Americans working within them.

Of the media outlets owned and operated by black people, a disparate percentage of them are dedicated to themes and images that largely degrade and devalue the African-American lifestyle and experience.
But in the midst of these issues that required immediate attention 25 years ago, the greatest threat to the black media agenda is the depiction of the HBCU student. Sex tapes, cafeteria brawls, drug use and hazing are the dominant, inaccurate themes representing black scholars from historically black colleges in new media and quickly creeping into mainstream themes.

It’s unreasonable to expect young adults to lead a new age of media literacy and creation in the face of so many celebrities, so much sex and stereotype programming over so many years, but our reality demands their creativity and commitment to change the future of media for all minorities.
One story, one quote, one headline can change the course of how African-Americans view ourselves and are viewed by others. When WorldStarHipHop profiles criminality, sexuality or general ignorance, it’s a blow to the culture. But when those same elements are on display by HBCU students, the best and brightest hope of the culture, it sharpens the attack on black culture and perceptions of how the culture will conquer generational stereotypes.

Commonly, when black students and their white counterparts at PWIs engage in the same activity, they are commonly regarded as “that crazy student” or “that ignorant dude/chick.”
When HBCU students do it, it’s labeled as “HBCU students are at it again.”
It is a skewed and painful reality of how an entire student body on any given HBCU campus can be unfairly and unreasonably represented by the extreme immaturity of one or a handful of students. Illicit videos produced and uploaded by HBCU students feed the racialized depiction of their classmates, and all black folks as oversexualized, under-educated citizens, and advance the stereotype of HBCUs as factories producing mediocrity at double the rate of greatness.And the conversation doesn't stop with media production, but with media consumption habits as well.

The more HBCU students lend their large, vibrant social media presence to commentary on sports, entertainment and controversy, the harder it will be for all of Black America to rise to new leverage in media control and representation. As sites like Necole Bitchie, the YBF, Media TakeOut, TMZ and WorldStar can claim the invaluable 18-24 African-American audience demographic, corporations seeking to capture this audience will continue to invest millions in the outlets feeding the stereotype of black celebrity worship and controversy-lust.And a group of educated, politically nuanced, socially conscious Americans will go unaccounted for and will remain on the outside looking in of having its interests, perspectives and values covered in media.

It’s up to HBCU students to become new media producers and consumers across politics, sports, culture and entertainment. Young people at historically black colleges have to expand existing media dialogue on the political process and ways to have their values accounted for in local and national media. They have to become the new, more aggressive generation of bloggers and commenters on news media sites, and dominant voices in talk radio programs that set the voice and agenda on topics that matter most to them.
No objective depiction of African-Americans in mainstream media can happen unless the students at the institutions built to sustain African-American culture create the outlets and lead the audiences that demand it.