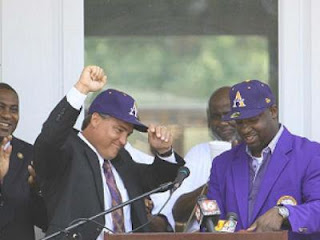 Last week Alcorn State, a historically black university in Lorman, Miss., announced that Jay Hopson, 43, would become the school's first white head football coach and the first in the Southwestern Athletic Conference, which is made up of HBCUs.

Fitzgerald Hill, who wrote How College Football Blindsides the Hopes of Black Coaches with veteran journalist Mark Purdy, calls it a "very interesting twist" that conveys that HBCUs are "saying 'we're moving forward in the 21st century, and we hired the best coach.'" But Hill also worries about the message that the hiring of a white football coach at a historically black college sends, considering that predominantly white institutions have been criticized for being slow to diversify their ranks.

In other words, if an HBCU can't find a black coach, who can? From the New York Times:

"Are you telling me that there was not a qualified football coach anywhere in the United States of America they could have hired to lead that program?" Hill asked, referring to African-American candidates. "It's interesting to me that Alcorn felt they couldn't find an African-American to lead their program."
Hill studied hiring trends of minority candidates and wrote his dissertation on their experiences.
"In my studies, people say the reason that they have not hired an African-American to lead their Division I program is because there aren't any qualified African-American coaches," he said. "We couldn't find one -- that's been the story for the last 20 years. Alcorn is saying the same thing. If the majority schools can't find any and the H.B.C.U.s can't find any, where does the black coach go?"