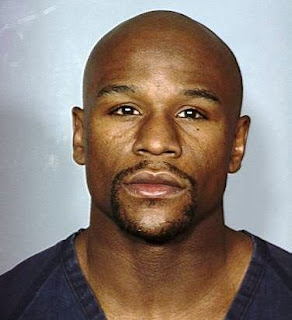 Lawyers for Floyd Mayweather Jr. say the undefeated champion is getting out of shape in solitary confinement and may never fight again if he's not released from the cramped Las Vegas jail cell where he began serving a three-month sentence earlier this month.
In an emergency motion filed Monday, lawyers asked the court to move him into the general jail population — something that jail officials had avoided out of fear for the celebrity's safety — or put him in house arrest for the rest of his sentence.
The jail's ''conduct may cause, not just huge financial harm to Mr. Mayweather, but also huge emotional harm if he is no longer able to pursue his boxing career because of the deconditioning he has suffered,'' lawyers wrote.
Justice of the Peace Melissa Saragosa said she'll decide later this week whether to ease jail conditions for Mayweather.
Las Vegas police Officer Bill Cassell declined to comment on the specific claims in the motion, but said jail administrators were keeping Mayweather in isolation to prevent fights.
Mayweather lawyer Richard Wright said he'd be willing to have the boxer serve the sentence in an apartment or somewhere less luxurious than Mayweather's posh Las Vegas-area home.
''I'm not looking for special treatment for Floyd Mayweather,'' Wright said. ''I'm looking for fair treatment.''
But prosecutor Lisa Luzaich said softening the sentence would be just another accommodation, similar to when Mayweather's jail surrender date was postponed for months after sentencing so he could fight Miguel Cotto in May.
''They keep chipping away, chipping away, chipping away,'' Luzaich said.
Mayweather pleaded guilty in December to misdemeanor domestic battery and no contest to two harassment charges that stemmed from an attack on his ex-girlfriend while two of their children watched. He was sentenced to three months and entered the jail June 1.
Mayweather's jail stay will be capped at 87 days because the judge gave him credit for three days previously served. It could be reduced by several weeks for good behavior.
In the motion, which was first reported by the Las Vegas Review-Journal, lawyers say Mayweather's personal physician, Dr. Robert Voy, visited the jail Friday and was concerned the 35-year-old fighter appeared to have lost muscle tone.
Voy estimated the boxer was consuming fewer than 800 calories a day — a drop from his usual 3,000 or 4,000 calories — and wasn't drinking enough because he isn't allowed bottled water and doesn't usually drink tap water.
Mayweather has been getting a little more than 30 minutes twice a day in a couple of barren recreation areas in the administrative segregation unit, Cassell said. His cell, no larger than 7-by-12 feet, has barely enough floor space for pushups and situps.
But prosecutors argued he's ''deconditioning'' by choice, and declining much of his food.
''He has the ability to exercise, he just chooses not to,'' Luzaich said. ''It's jail. Where did he think he was going? The Four Seasons?''
Voy and Wright also pointed to Mayweather's declining emotional state.
''I am concerned about Floyd withdrawing, developing anger he cannot dissipate through the usual means of dedicated exercise and training,'' Voy wrote in an affidavit. ''Boxing has been Mr. Mayweather's life since he was a young man and we need champions of this type to continue to their natural retirement and hopefully their contributions to society thereafter.''