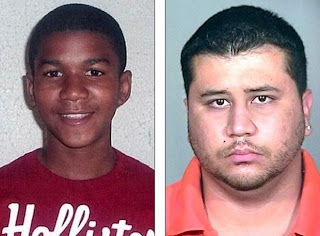 A Florida judge on Friday revoked the bail for George Zimmerman in the Trayvon Martin case, saying he had misled the court about his finances, and ordered him to present himself to the court within 48 hours.
Prosecutors alleged that Zimmerman, 28, misled the court regarding his finances when $150,000 bail was granted April 20 and accused him of holding a second U.S. passport that he did not surrender to the court. Zimmerman is facing second-degree murder charges in the shooting death of Martin, 17, in February.
In a hearing in Sanford, Fla., Judge Kenneth Lester said Zimmerman engaged in a "material falsehood" about his finances.
The state attached a copy of the application for that passport to its motion. The state claims in its motion that Zimmerman obtained the second passport after filing a claim that his original passport had been lost or stolen.
Zimmerman's attorney, Mark O'Mara, conceded there was a second passport, saying, "It's not devious or inappropriate" to have a second passport if first one is lost or stolen. He said the second passport has never been stamped.
He said Zimmerman filed for a second passport after thinking he had lost his first one; Zimmerman later discovered he had not lost the first one. O'Mara said it's his fault court did not have the second passport earlier.
Lester said he was not swayed by the prosecution's argument on the passport.
The revocation motion was filed as a hearing opened on the confidentiality of evidence in the case, including Zimmerman’s statement to police.
Assistant State Attorney Bernie de la Rionda asked that the names of witnesses be sealed.
He told Judge Kenneth Lester that the case is being tried in the public court as opposed to the court of law, partially due to social media -- including Twitter and other technologies that he added he has "never heard of."
He called the topic an area where "state and defense will agree."
A consortium of more than a dozen media groups is asking the judge not to seal some records in the case. Prosecutors and Zimmerman's attorney fear witnesses will be harassed if their names are publicized.
The media groups say those aren't good enough reasons to keep what is usually a public record from being released.
Zimmerman is accused of killing Martin as he walked through a gated residential community in Sanford, Fla., near Orlando, on Feb. 26.


Visit msnbc.com for breaking news, world news, and news about the economy
Posted by HBCUX at 12:24 PM