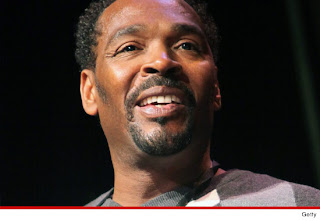 By NBC News, msnbc.com staff and news services
Rodney King, the black motorist whose videotaped beating by Los Angeles police officers in 1991 sparked some of the deadliest race riots in U.S. history, was found dead on Sunday, police said. He was 47.
Police in Rialto, Calif., found King's body in a swimming pool after getting a 911 call from his fiancee, Rialto Police Capt. Randy DeAnda told NBC News. Officers pulled King from the pool and began doing CPR but he was unresponsive.
King was transported to Arrowhead Hospital in Colton, where he was pronounced dead at 6:11 a.m. PDT, DeAnda said.
The San Bernadino County coroner will perform an autopsy.
"Right now we have no reason to believe there was foul play because of the circumstances," Rialto Police Sgt. Richard Royce told msnbc.com. "The evidence is that it was a simple drowning."
Homicide detectives continued to investigate mid-Sunday morning, Royce said, although he called the investigation "a standard death investigation."
A file photo from the Los Angeles Times shows that the pool is oval-shaped, and that King had erected tarps around it to prevent neighbors from peering in. Two dates are inscribed along the pool wall: 3/3/91, the day King was beaten, and 4/29/92, the day a jury acquitted three of the four officers who beat him.
King was beaten by Los Angeles Police Department officers on a dark street on March 3, 1991, after he was stopped for speeding. Four officers hit him more than 50 times, kicked him and shot him with stun guns. A bystander videotaped much of the incident from a distance.
A year later, a California jury acquitted three of the four officers, three of whom were white and one Hispanic. The jury deadlocked on one of the charges for Officer Laurence Powell.
The riots that erupted on April 29, 1992, were among the most lethal in U.S. history. By the time order was restored, more than 50 people had died, nearly 3,000 were injured and thousands of businesses were damaged or destroyed.
In one of the most searing images from the riots, a 33-year-old white construction worker named Reginald Denny was pulled from his vehicle and beaten unconscious by four men at a Los Angeles intersection. Twenty years later, he has still not recovered from his injuries.
The violent reaction prompted King's famous plea on television: "Can we all get along?"
Nearly a year later, a federal jury convicted two of the police officers of a federal charge of violating King’s civil rights and sentenced them to 30 months in prison. Two other officers were acquitted. King eventually received a $3.8 million settlement from the city, and the case led to sweeping changes in LAPD.
The police chief, Daryl Gates, came under intense criticism from city officials who said officers were slow to respond to the riots. He was forced to retire. Gates died of cancer in 2010.
In the two decades after he became the central figure in the riots, King was arrested several times, mostly for alcohol-related crimes. He later became a record company executive and a reality TV star, appearing on shows such as "Celebrity Rehab."
In an interview earlier this year with The Associated Press, King said he was a happy man.
"America's been good to me after I paid the price and stayed alive through it all," he said. "This part of my life is the easy part now."
King had recently been promoting his just-published memoir, "The Riot Within: My Journey From Rebellion to Redemption." The book came out around the 20th anniversary of the L.A. riots.
King, who has three children, was engaged to marry Cynthia Kelley, a juror in the civil suit he brought against the city of Los Angeles, according to the biography that accompanied his book.
The Los Angeles Times published a quote that King gave the newspaper earlier this year: "I would change a few things, but not that much. Yes, I would go through that night, yes I would. I said once that I wouldn't, but that's not true. It changed things. It made the world a better place.''


Visit msnbc.com for breaking news, world news, and news about the economy
Posted by HBCUX at 6:48 AM