Baptist leader: Decision not to wed black couple must be a learning experience 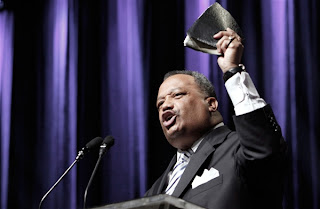 The Rev. Fred Luter, head of the Southern Baptist Convention, said a Mississippi pastor's decision to cancel an African-American couple's wedding ceremony was "unfortunate," but a situation that all pastors can learn from.
UPDATED July 31, 2012
By Louis Casiano, NBC News
The leader and first African-American president of the Southern Baptist Convention said Monday that a Mississippi church's decision to not marry a black couple "is unfortunate" and "an isolated incident from which pastors can learn."
The Rev. Fred Luter told the Baptist Press, the official newspaper of the SBC, the church's decision should be not be seen as representing the church's position.
"It's unfortunate that it happened, but we've got to learn from it, and be able to go on and do what God has called us to do," Luter told the BP.
The First Baptist Church of Crystal Springs, Miss., made headlines last week when its pastor, Stan Weatherford, told Charles and Te'Andrea Wilson one day prior to their wedding that he could not perform the ceremony at the church.

Couple say Mississippi church blocked wedding because they are black
Weatherford said a small minority of the congregation had spoken out against the marriage being performed at the church because it involved black people. He married the couple at a nearby church instead.
"The church congregation had decided no black could be married at that church, and that if he went on to marry her, then they would vote him out the church," Charles Wilson told a local news station.
The Wilsons attended the church regularly but were not members.
"What we can learn from it is that we need to talk to our membership about issues," Luter said in the interview published Monday. "I think if the pastor would have talked to more members about this … when this situation occurred … it probably would not have happened the way it happened."
The paper reported most of the churchmembers did not share the sentiments of the few who objected to the Wilsons' nuptials.
The SBC has come out against the church's decision and affirmed that racism is against God's will, according to the Baptist faith.
"The convention's position on race relations is clear: 'In the Spirit of Christ, Christians should oppose racism,'" Roger S. Oldham, a church spokesman, told the Press.
Luter, a pastor himself, said he felt sympathy for Weatherford.
"I felt for the pastor because being a pastor myself, I know how awkward situations like that can be, whereby you have a handful of folks who have influence and will cause issues that the other folks are not aware of."