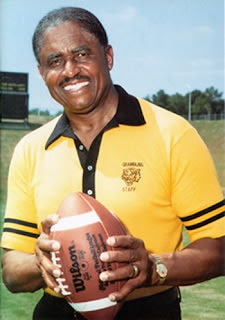 UPDATED July 26, 2012
By: HBCUBuzz.Com, Administration
With the NCAA vacating 111 wins from Penn State coach Joe Paterno, Grambling State coach Eddie Robinson returned to the top of the wins’ list at a Division I school (including Football Bowl Subdivision and Football Championship Subdivsion schools).
Penn State Office of Physical Plant workers cover the statue of former football coach Joe Paterno near Beaver Stadium on Penn State’s campus in State College, Pa., on Sunday. The university announced earlier Sunday that it was taking down the monument in the wake of an investigative report that found the late coach and three other top Penn State administrators concealed sex abuse claims against retired assistant coach Jerry Sandusky.
Paterno’s last win against Illinois on Oct. 29 pushed his total to 409, one more than Eddie Robinson’s 408.
But the NCAA vacated all wins from 1998-2011, the alleged date that former defensive coordinator Jerry Sandusky is thought to have sexually abused children, some of those crimes committed on Penn State’s campus.
Former Florida State coach Bobby Bowden won 377 games, the most at any Football Bowl Subdivision program.
John Gagliardi of Saint John’s in Minnesota, a Division III school, has the most wins of any college football coach with 484.
The NCAA slammed Penn State with an unprecedented series of penalties Monday, including a $60 million fine and the loss of all coach Joe Paterno’s victories from 1998-2011, in the wake of the Jerry Sandusky child sex abuse scandal.
Other sanctions include a four-year ban on bowl games, the loss of 20 scholarships per year over four years and five years’ probation. The NCAA also said that any current or incoming football players are free to immediately transfer and compete at another school.
NCAA President Mark Emmert announced the staggering sanctions at a news conference in Indianapolis. Though the NCAA stopped short of imposing the “death penalty” – shutting down the Nittany Lions’ program completely – the punishment is still crippling for a team that is trying to start over with a new coach and a new outlook.
Sandusky, a former Penn State defensive coordinator, was found guilty in June of sexually abusing young boys, sometimes on campus. An investigation commissioned by the school and released July 12 found that Paterno, who died in January, and several other top officials at Penn State stayed quiet for years about accusations against Sandusky.
Emmert fast-tracked penalties rather than go through the usual circuitous series of investigations and hearings. The NCAA said the $60 million is equivalent to the annual gross revenue of the football program. The money must be paid into an endowment for external programs preventing child sexual abuse or assisting victims and may not be used to fund such programs at Penn State.
“Football will never again be placed ahead of educating, nurturing and protecting young people,” Emmert said.
Emmert had earlier said he had “never seen anything as egregious” as the horrific crimes of Sandusky and the cover-up by Paterno and others at the university, including former Penn State President Graham Spanier and athletic director Tim Curley.
Posted by HBCUX at 9:11 AM