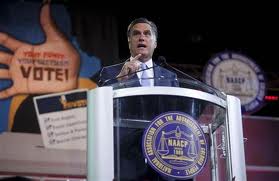 UPDATED July 16, 2012
By Tommy Meade Jr. from HBCUBuzz.com
On Wednesday, July 11, 2012 Republican Presidential Candidate Mitt Romney addressed the 103rd NAACP Annual Convention in Houston, Texas where he spoke on civic engagement. Romney, who hopes to “represent all Americans, of every race, creed, and sex orientation… from the poorest to the richest and everyone in between,” if he wins office was booed by an audience highly in favor of current President Barack Obama (D).
Like most Republican Presidential candidates at the NAACP Convention, Romney looked as if he was the odd one out during his speech—a lone soldier trying to persuade an audience whose views are much different from his.
Shortly into his argument for election, Romney thanked the audience for their hospitality and said he enjoyed the gospel music that was displayed.  “I do love that music,” Romney said. “I have to tell you, I do love listening to that organ music, and the piano.”
The Republican Presidential candidate focused on issues such as education, equal opportunity, unemployment rates in the black community, and creating new jobs throughout his speech. Romney said the fight for equality for all Americans is far from over and if the black community seeks change, he is the right candidate for the job.
“Many barriers remain. Old inequalities persist. And some ways, the challenges are even more complicated than before,” Romney said. “If equal opportunity in America were an accomplished fact, black families can send their sons and daughters to public schools that truly are for the hope of a better life.”
Romney talked about the overall unemployment rate in the black community (how it has grown from 13.6 percent to 14.4 percent) and appeared to have full consideration from the crowd until he criticized Obamacare for spending “over a trillion dollars more than what we take in every year.”
“I’m going to eliminate every non-essential, expensive program I can find, that includes Obamacare,” he said before the audience started to boo him. But like a true leader, Romney composed himself, waited for the audience to settle down, and explained his position.
Romney then spoke about the changes that would occur if he was chosen as the next President of the United States of America and at the end of the speech, he received a standing ovation.
“Should I be elected president, I will lead as I did when I was governor [of Massachusetts],” said Romney. “If you want a president who would make things better in the African American community, you are looking at him.”
Conversely, the 96 percentage of black American voters who supported Obama back in 2008 would probably think differently.
Posted by HBCUX at 8:08 AM