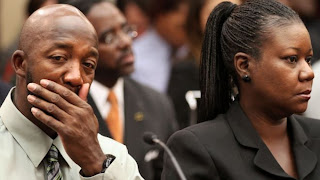 
By Scott Stump of msn.com


“I really think that’s ridiculous,’’ Martin’s mother, Sybrina Fulton, told TODAY’s Matt Lauer. “I wish Trayvon was here to tell his side of the story. I don’t believe that it’s God’s plan for him to kill an innocent teenager.’’
Zimmerman grants TV interview to Fox News

Wednesday night, in his first television interview, Zimmerman told Fox News host Sean Hannity his version of the events of the night of Feb. 26, when he shot the unarmed 17-year-old in Sanford, Fla. Zimmerman, 28, has been charged with second-degree murder, but said he does not regret following Martin that night while serving as a neighborhood watch volunteer, nor does he regret having been armed.
Zimmerman, who is the son of a white father and a Peruvian mother of Hispanic descent, added that he “is not a racist and not a murderer’’ in a case that has sparked heated emotions regarding race and Florida’s controversial self-defense laws. Martin’s supporters believe Zimmerman racially profiled the black teenager on the night of the shooting, as Zimmerman decided to follow him after alerting the local police to what he regarded as a suspicious person in the neighborhood.


“He had no regards for Trayvon’s life, and he don’t regret taking Trayvon’s life,’’ Trayvon’s father, Tracy Martin, told Lauer. “Had George Zimmerman stayed in his vehicle, Trayvon would be with us here today.’’
Zimmerman, who is currently out on bail, claimed in the interview that he shot Martin in self-defense after Martin attacked him out of the blue, punching him in the nose and head repeatedly. Zimmerman said that when Martin saw Zimmerman’s gun, he made a reach for it and cursed at Zimmerman.
Zimmerman: 'I'm not a racist and I'm not a murderer'

“At that point, I realized that it wasn’t my gun, it wasn’t his gun. It was the gun,” Zimmerman said. “He said, ‘You’re gonna die tonight, mother-f-----.”
“Trayvon is a 17-year-old child, and I can’t imagine him saying something like that,’’ Fulton said. “He was frightened for his life.’’
Martin’s family and their attorney disputed Zimmerman’s account of the events of that night.
“Those are the words of George Zimmerman,’’ Martin said. “George Zimmerman said they were fighting over the gun. There are no witnesses to say they were fighting over the gun. George Zimmerman is here to tell his story. Travyon is dead.’’
“It speaks for itself when you listen to the objective evidence,’’ said family attorney Benjamin Crump. “Just listen to the 911 tapes. There are so many inconsistencies in the things that George Zimmerman is saying.


“The state attorney is going to look at that interview that he did last night as a gift when they cross-examine him. It’s just George Zimmerman’s version. It’s about his credibility, and I think everybody in America would say his credibility cannot be relied upon.’’
Zimmerman expressed regret during the interview for Martin’s death and the pain it has caused Martin’s family, but he also said that there has been a rush to judgment against him.
“I am sorry that they buried their child,’’ Zimmerman said. “I can’t imagine what it must feel like. And I pray for them daily. I’m sorry that this happened. I hate to think that because of this incident, because of my actions, it’s polarized and divided America, and I’m truly sorry.’’
“For him to think we’re rushing to judge, he rushed to judge Trayvon,’’ Martin said.
Zimmerman has indicated that he would be willing to speak privately to Martin’s parents about the incident.
“Absolutely not,’’ Fulton said.


Visit NBCNews.com for breaking news, world news, and news about the economy
Posted by HBCUX at 10:08 AM