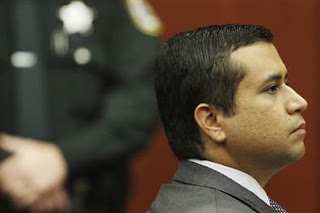 
ATLANTA  — It’s been perhaps the biggest mystery of the Trayvon Martin murder case saga: George Zimmerman’s cop connections.
An aspiring police officer, Mr. Zimmerman has been accused by prosecutors of play-acting as a police officer the night he pursued, shot and killed Trayvon Martin in Sanford, Fla. after pegging him as a suspicious young black man roving the neighborhood. The case turned national when police initially chose to believe the neighborhood watchman’s self-defense claims, leaving a special state prosecutor to instead level murder charges 44 days later.
But questions about whether Zimmerman had actual connections with police or justice system higher-ups that may have influenced the early decision to not charge him were piqued this week with the release of new evidence in the closely-watched case, including an observation by one detective that Zimmerman’s take on the shooting seemed “scripted.”
Documents from the FBI and the Florida Department of Law Enforcement suggest indirectly that Zimmerman’s closest adviser in the aftermath of the Trayvon Martin shooting has been a federal agent – a US air marshal and former Seminole County sheriff’s deputy identified by the Miami Herald as a man named Mark Osterman.
Mr. Osterman was at Zimmerman’s side as he returned to the scene of the crime the day after the shooting to go over what happened with detectives.
The Herald also reported that Zimmerman and Osterman were shooting buddies and that, as the Trayvon Martin story broke and the whole country was talking about what George Zimmerman and the Sanford police had done, the neighborhood watch captain took refuge for six weeks at Osterman’s house in Lake Mary.
Throughout the investigation, Trayvon’s family have wondered whether Zimmerman had an inside adviser. Some had pointed fingers at Seminole State Attorney Norm Wolfinger, because of his decision to let Zimmerman go. Mr. Wolfinger stepped aside when Gov. Rick Scott sought to appoint a special prosecutor to the case. That role eventually fell to Duval County state prosecutor Angela Corey.
And then there was speculation that Zimmerman’s father, Robert Zimmerman, a retired magistrate judge from Virginia, was somehow helping his son through the justice system.
Lingering suspicions perked up again this week after prosecutors released evidence that showed an email connection between Zimmerman and now-fired Sanford Police Chief Bill Lee, where the two exchanged amicable notes about the resolution of a case where a previous chief refused to charge the son of a police lieutenant for the beating of a homeless black man.
Moreover, Mr. Lee, who spent 30 years at the Seminole County Sheriff’s Department, may have known Osterman since their tenures at the department overlapped. At any one time, the Seminole County Sheriff’s Department has more than 500 employees.
Osterman was fired from the sheriff’s office in 1998 in the midst of a scandal where he and a fellow officer were duped into off-duty security gigs by a con man claiming to be a famous baseball star named Juan Diaz. Osterman took the job without getting permission from the sheriff, which compounded the embarrassment and led to his firing.
Osterman has since worked as a beach guard and since the early 2000s as a federal air marshal, which were hired in large numbers after 9/11 to provide covert security on flights.
In his April interview with the FBI, Osterman claimed Zimmerman was estranged from his parents until the shooting, and that he had feared the New Black Panther Party, which put a $10,000 bounty on Zimmerman after the shooting.
“Zimmerman is very concerned with all the negative reaction from the press and others and wants more evidence released to show what really happened,” Osterman told the FBI.
But Osterman denied having any influence on Zimmerman other than as a friend and confidante, according to documents obtained by the Herald. During his conversations with Zimmerman, Zimmerman “never asked … what not to say during his interviews with the police,” according to the FBI. Osterman “stated Zimmerman did not understand the process and his only advice to Zimmerman was to tell the truth.”
Zimmerman, on at least one occasion, did not heed that advice. He was remanded back to jail by Judge Kenneth Lester in June after it was revealed he had conspired with his wife, Shellie, to keep $135,000 worth of donations out of the court’s eye, in order to win a low bond. Shellie was charged, booked and released on a perjury charge after the initial bond was revoked.
Most recently, the judge’s suggestion at a recent bond ruling that Zimmerman had “flaunted the system” and engineered “deception upon the court” became Zimmerman’s basis for a motion to remove Judge Lester, filed Friday. The motion chided Lester for “words crafting an order that was harsh and morally indignant” while failing to address the self-defense claims.
While Zimmerman’s lawyer Mark O’Mara explained at that hearing that Zimmerman was young, confused, and distrustful of a system that seemed to be discounting clear evidence of self-defense, Judge Lester articulated another view of Zimmerman: as a knowing manipulator who – based on lies about the money and a second passport Zimmerman had procured – was planning to flee the country to avoid a trial.
After rapping Zimmerman for his behavior, Lester released him on a $1 million bond earlier this month. Zimmerman is currently in hiding somewhere in Seminole County.