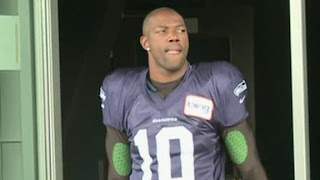 Terrell Owens' NFL return lasted less than three weeks.
Owens was released by the Seattle Seahawks on Sunday, part of the league-mandated roster reductions from 90 to 75 players.
The 38-year-old receiver posted a message on his Twitter account shortly before 11 a.m. that he had been released and the Seahawks made the move official in the afternoon.
"I'm no longer a Seahawk," Owens tweeted. "I THANK the organization 4 the opportunity, I'm truly blessed beyond belief. My FAITH is intact & will NOT waiver."
Owens wasn't the only veteran to get cut by the Seahawks. Offensive linemen Deuce Lutui and Alex Barron both had their veteran contracts terminated, while Seattle waived/injured defensive back Roy Lewis (knee), tight end Cameron Morrah (toe), defensive tackle Pep Levingston (knee) and linebacker Jamison Konz (shoulder).
Owens signed a one-year deal with Seattle on Aug. 7, following a sterling workout that had coaches and Seahawks staff raving about how good he looked for having not played an NFL game in more than 18 months.
"We really liked the group that we assembled. Terrell came in here and busted his tail and he looked really effective right from the start," Seattle coach Pete Carroll said. "But as we just took a look at our guys that are coming through the program and growing up with us we thought that it would be best for us to stay with those guys."
Owens signed just before Seattle's first preseason game and made his debut in the second week against Denver. But his preseason performance was more notable for the passes he dropped than anything he caught.
Owens dropped a potential 46-yard touchdown against Denver on a perfect throw from Matt Flynn. He failed to make a catch in any of his five targets against the Broncos and then had another glaring drop against Kansas City on Friday night.
He finished the preseason with just two receptions — a 40-yard catch from Russell Wilson where Owens had to slow down and lean back to haul in the pass and a 1-yard reception on a screen.
For as impressive as his long catch was in Seattle's 44-14 win over the Chiefs, it served as Owens' only highlight in a Seahawks uniform.
Owens was trying to make a comeback after not playing since Week 15 of the 2010 season while with Cincinnati. He sat out the entire 2011 season following surgery on his left knee and failed to receive any offers.
Owens got the rust off this spring playing for the Allen Wranglers of the Indoor Football League. He had 35 catches for 420 yards and 10 touchdowns while playing eight of 11 games, but was released and lost an ownership stake in the team in May.
Owens, a third-round draft choice by San Francisco in 1996, has started 201 of the 219 regular-season NFL games he has played in his career. He has 1,078 receptions for 15,934 yards and 153 touchdowns — the second most in league history.
His nine seasons with at least 1,000 yards receiving and 13 years with at least 50 catches rank third. His total receptions are sixth on the NFL career list. Owens spent eight seasons with San Francisco, two with Philadelphia, and three with Dallas before a pair of one-year stints with Buffalo and Cincinnati.
"I've been rehabbing and working out for the past year since the injury and that's all I've ever wanted since I've been out is another opportunity," Owens said following his first practice on Aug. 8. "That has been given to me by the Seattle Seahawks and again I am very grateful for that."
Among Seattle's other cuts to reach the 75-man limit were wide receiver Phil Bates, running backTyrell Sutton, cornerbacks Ron Parker and Donny Lisowski and offensive lineman Edawn Coughman.