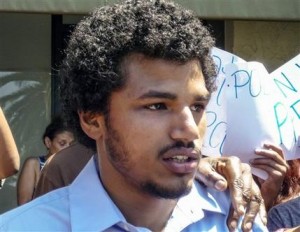 Published on August 21st, 2012 | by HBCUBuzz.com Administration
cell phone video (below) of Los Angeles police officers holding down and punching 19-year-old Ronald Weekley Jr. in Venice, California, has surfaced.
Weekley Jr. was picked up outside his home for allegedly skateboarding on the wrong side of the street, on Saturday, reports KTLA-TV.
The video, which some have compared to the Rodney King beating, shows two officers holding Weekley Jr. down while a third officer punches the young man in the face. A fourth officer is speaking into his radio.
A fifth officer appears to be ordering an unidentified citizen, who is recording the beating, to move away. Bystanders are heard, off-camera, screaming at the police officers.
Ronald Weekley Sr. told KTLA-TV: “If you see the videotape, there are about three or four officers on top of my son. Then an officer comes into view, gets down on the ground and hits him in his face, and that’s something you can hear on the tape. The results are, is that he has a broken nose, he has a broken cheekbone and he has a concussion.” Source
Posted by HBCUX at 7:28 AM