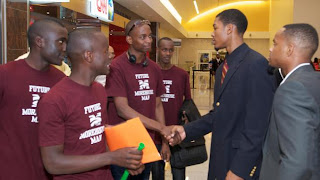 by Kunbi Tinuoye
ATLANTA – For 17-year-old Abel Gumbo, things couldn’t be better. Only a few months ago he was among more than a thousand students at a high school in the Zimbabwean capital, Harare. Today he is rubbing shoulders with future leaders at Atlanta’s Morehouse College.
Gumbo is one of 10 students from Africa who have been awarded full ride scholarships to Morehouse, beginning this fall. Everything is being paid for by billionaire Strive Masiyiwa, Zimbabwe’s richest man, according to the 2011 Forbes list.
The telecom tycoon has committed $6.4 million in scholarship dollars to send 40 African freshmen to Morehouse over a four-year period. This year’s intake comprises of two teenagers from Burundi and eight from Zimbabwe.
“It’s been an experience,” said Gumbo, who is studying for an undergraduate computer science degree. “I have left everything behind to gain an education in America.  Computer science is technologically more advanced in the States and I am learning a lot about people from different cultures.”
“All international students are housed in the W.E.B. Du Bois International House, where they are placed with a domestic roommate,” said Gwen Wade, Director of International Student Services and Study Abroad Programs at Morehouse College.
“This helps them to transition to life in the U.S., and the cross-cultural communication enables international students to become more involved and aware of U.S. customs, such as food, music and dress.”
“My life has been transformed,” said Prince Abudu, 17, from Zimbabwe, who is also studying computer science. “Morehouse has taught me the spirit of brotherhood and to strive for success.”
The 10 students, who arrived in Atlanta last month, are the first class of the newly-established Ambassador Andrew Young International Scholars program. The international scholarships were set up by the Capernaum Trust, the education arm of Masiyiwa’s Higher Life Foundation.
Higher Life advertised for students throughout Zimbabwe, Burundi and South Africa to fill the highly competitive 10 scholarship slots. More than 500 of the brightest students from across the region applied.
A team from Morehouse flew to Zimbabwe to interview 20 finalists in June. Ten were selected and the others received scholarships to a South African university. The winners were chosen on the basis of their high SAT scores, grueling face-to-face interviews and a written essay.
Indeed, Masiyiwa has high hopes for the recipients of the scholarship. His vision is to develop young talent to become future leaders who will return to work in their native countries.
“My dream is to become an ethical leader,” said Abudu. “I want to be a morally conscious person, who can develop my country through entrepreneurship and business.”
Both boys are from modest backgrounds. Gumbo became an orphan at 10 years old and Abudu is from a single parent household, where his mother struggles to keep the family afloat since his father died in 2004. What makes them stand out is they are driven and academically talented.
“He himself [Strive Masiyiwa] from a very early age, when he was still in Zimbabwe, had heard about Morehouse College and had always wanted to come here,” said Petronella Maramba, executive director of Zimbabwe’s Capernaum Trust, in a recent televised interview with CNN.
“So when the opportunity was afforded to establish a relationship with Morehouse College to further a vision that he’s always had. To develop, young, bright, orphaned children in Africa. To help them develop into leaders who are able, after having obtained a good education in the United States of America, to go back to Africa and give back to the community and develop it further than what’s already been done in the past,” she added.
In fact, Morehouse is on a mission to become a truly global university. This year 26 international students made Morehouse their home, compared with 9 during the last academic school year.
Twenty-two are from Africa, which includes the ten students from Higher Life scholarship program, and three from the Caribbean — two from the Bahamas and one from Jamaica
“The 26 international students of the 2012 freshman class represent the largest incoming international class in the history of Morehouse College,” said Wade.
“We are extremely excited to afford our students, both foreign and domestic, with the opportunity to meet, share, interact and foster relationships with each other for a mutually rewarding experience. This allows all students to better understand and appreciate both our culture, as well as others.”