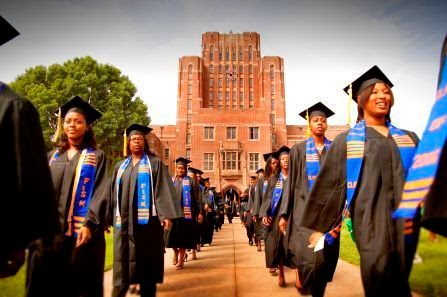 The debate around the relevancy of historically black colleges (HBCUs) is at least as old as the 1954 Supreme Court ruling in Brown v. Board of Education that "separate but equal" educational systems are inherently unequal. The data and experiences of countless HBCU alumni like me tell a much different story: HBCUs play an invaluable role in educating often underprepared students successfully, and without HBCUs, the hopes and dreams of thousands of capable African-Americans would go unrealized.
While HBCUs enroll only 15 percent of African-American collegians, they award 30 percent of all degrees obtained by African-Americans. Hence the relevancy of HBCUs is unassailable. But we can ill afford to leave the debate there. Today, like never before, colleges and universities must compete for students, faculty, money and public recognition. HBCUs are in a position to reaffirm their significance by graduating a preponderance of their students, distinguishing themselves academically and ensuring that they are expertly managed.
For many reasons, including historic under-resourcing, HBCUs are challenged to deliver the sort of outcomes required in our changing and more demanding society. The debate does not move either them or our nation forward. Rather, it is time to ask whether HBCUs are sufficiently self-critical and adaptive to transform into the institutions they will have to become if they are to be sustainable. Self-critical institutions intentionally adjust their thinking and behaviors based on examined awareness of their own missions and outcomes. They seek self-improvement.
Given their long-standing mission to educate underprepared students, HBCUs should be at the forefront of curricula, teaching and student-advising innovations. Given their century and a half of underfunding and having to do more with less, HBCUs should be leaders in institutional efficiency, cost-sharing and partnerships. And given their reliance on public funding, HBCUs should be experts at garnering federal support for their initiatives. But none of these is so.
HBCUs must challenge themselves to achieve higher levels of excellence and sustained outcomes by transforming their self-understandings. Doing so requires placing these institutions under critical self-scrutiny. To improve their outcomes, HBCUs will have to undertake a process of critical self-reflection in which their institutional stories, myths and assumptions are laid aside in a search for truth. Fundamental questions about institutional effectiveness will have to be addressed in order to develop accurate knowledge about their strengths and weakness.
And then HBCUs will have to take self-corrective action. These measures are internal to institutions and require internal leadership, but President Barack Obama recently gave HBCUs a much-needed lift. In an unprecedented acknowledgment of the importance of HBCUs, Obama has ordered that every agency within the federal government actively seek out opportunities for HBCUs to participate in federal programs. Importantly, the president did not call for affirmative action for HBCUs. He called for the engagement of HBCUs, which will be based on their merits.
The problem is that many HBCUs have been ill-equipped to be full participants in solving the nation's problems or helping it reach the president's educational goal for America to have the most educated citizenry in the world in next decade. Many HBCUs have neither the internal managerial capacity nor institutional outcomes necessary to take full advantage of the president's mandate, which should be a wake-up call to all of us who value HBCUs that their sustainability rests in great measure on how well they are managed to achieve their aims.
Yet, some HBCUs stand out as models, not just among other HBCUs but among institutions nationally, for their insightfulness. For instance, Spelman College has long been the envy of HBCUs for garnering private donations and public support, for enrolling well-prepared students, for being a leader in student success and for having the highest graduation rate among all HBCUs. But Spelman did not get there without a persistent effort.
Under the leadership of President Beverly Daniel Tatum, Spelman has done and continues the hard work of explicating its outcomes and ambitions in a quest for self-improvement. By removing their presuppositions -- good and bad -- about the institution, Spelman's faculty, alumni and staff were able to continue to value the institution's heritage while pursuing a progressive agenda of self-learning that is resulting in improvement in all major areas of institutional effectiveness.
There is great hope that the new generation of black college presidents who have taken the helm of institutions like Howard and Tuskegee universities will follow Spelman's example. Indeed, it is time for all HBCUs to adopt self-critical mindsets and make the changes necessary to thrive. (Huffington Post)