HAMPTON U to the NCAA Tourney! 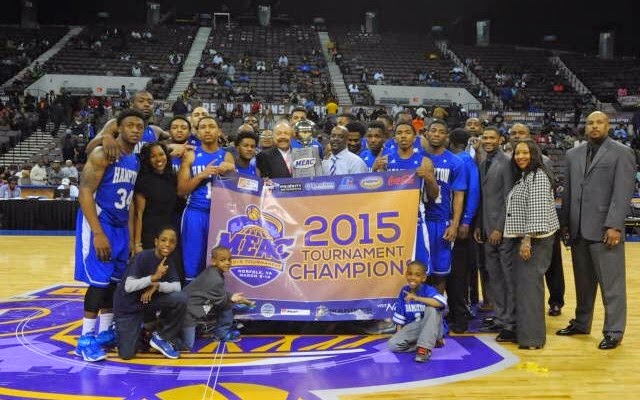 Maybe (Some) HBCUs Belong In The First Four

After winning the MEAC championship, Hampton will be among eight other teams playing the NCAA Tournament First Four this week.

The Pirates (16-17) will face Manhattan in Dayton, Ohio on Tuesday.

And considering that several power conference teams posted better records and wins against better competition, that’s the way it should be.

Some black college basketball fans may ask, why are historically black college and university programs like Hampton even in this position at all after earning what is believed to be an automatic bid to the NCAA Tournament?

Maybe not being able to consistently stay competitive against Top 25 teams in the regular season is a factor.

This season, the SWAC and MEAC went 88-242 in non-conference play.

Hampton, for example, started the season 4-6 with losses to Iowa, Syracuse, American and North Dakota State.

Maybe suffering far too many blowouts in the NCAA Tournament at the hands of No. 1 and No. 2 seeds has something to do with it. The SWAC and MEAC are a combined 10 and 67 all-time come March.

Maybe participating in leagues that rank at the bottom of the RPI and strength of schedule rankings in Division I basketball has something to do with it. That 254 RPI does not look good on the resume come selection Sunday.

While Norfolk State did beat Missouri, Southern nearly became the first No. 16 seed to knock off a No. 1 seed when the Jaguars took Gonzaga to the brink of an upset and Texas Southern beat Michigan State,   who are we really kidding here? Those are outliers.

Hampton did not post a single win against a Top 50 opponent this season. Not a Top 100 foe either. The Pirates did, however, have a winning (12-7) record against schools in the Top 200. So they beat up bottom feeders like them.

Some have suggested maybe at-large or bubble teams should only have to make the untimely trip to Dayton each season instead of a conference champion from a mid-major.

Hampton did not even win the MEAC regular season title. That was captured by North Carolina Central who finished the season with a 16-0 conference record.

The Eagles were clearly the best team in the MEAC all season. And should probably be in the NCAA Tournament if the MEAC wasn’t a poor one-bid league, according to NCCU head coach LeVelle Moton.

I am under the belief that if HBCU teams could steal a few wins here and there against elite opponents and make consistent runs come March, the tournament committee might be willing to think more favorably of an HBCU unit down the road and keep them out of the First Four.

Until then, HBCU basketball fans have no recourse other than to complain about a school from the MEAC or SWAC than shouldn’t be in the First Four even though it is unlikely those schools will not come close to winning the national championship.
Posted by PSC at 4:47 AM