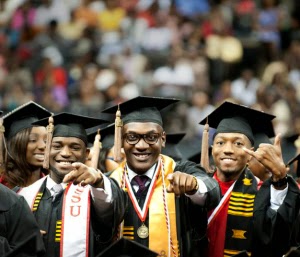 When Olivia Sedwick made the financially-conscious choice to attend a historically black college over Baylor, Marquette, Xavier and Purdue, her decision surprised some she knew.

Olivia Sedwick speaks at the Chancellor's Champagne Brunch at
Olivia Sedwick speaks at the Chancellor’s Champagne Brunch at Winston-Salem University.
But when Sedwick crept into her first class at Winston-Salem State University to find a black male professor helicoptering over students and spitting wisdom as fast as rapper DMX, she knew she had made the right decision.

“I fell in love with the school,” she says. “We talked about things that I had never had the chance to before coming from a predominantly white high school.”

For Olivia, attending a historically black college meant that she was finally able to explore her identity as a black woman and the sense of double consciousness that comes with it.

The experience has been life-changing.

So, when Black Twitter erupted into a caustic debate about predominantly white institutions (PWI) — schools of higher learning in which whites account for at least 50% enrollment — and historically black colleges and universities (HBCU) — post-secondary schools that were established and accredited before 1964 and whose principal mission was and is the education of African-Americans — Sedwick was unnerved.

She says the perceived academic inferiority of HBCUs in comparison to PWIs bothered her most.

“I feel that my hard work and dedication to my academics is discredited by the assumption that my education is inferior to those that attend a PWI. It bothers me that this debate happens within our own community at all, because we fail to see the bigger picture,” Sangster says.

The bigger picture, he says, is the overall advancement of African-Americans.

I think people only discredit HBCUs because of how people view blackness. So, when you speak of black institutions, people kind of turn their nose up. People automatically elevate PWIs because they’re white colleges and there’s this idea that a majority-white school is quality

While HBCUs constitute just 3% of the nation’s institutions of higher learning, they graduate nearly 20% of black students who earn undergraduate degrees. And more than 50% of African American professionals and public school teachers matriculate from HBCUs.

In addition, approximately 20% of black students earn science and engineering bachelor’s degrees at HBCUs according to the National Science Foundation.

Still, the stigma that HBCUs are less rigorous and garner fewer post-graduate job opportunities persists. But why?

Nakia Williams, a senior at Indiana University-Bloomington, says that the recalibration of whiteness as the standard for success plays a profound role.

Nakia Williams, Ebony Holmes, Shayla Hill
Nakia Williams, Ebony Holmes, Shayla Hill at Indiana University Bloomington.
“I think people only discredit HBCUs because of how people view blackness. So, when you speak of black institutions, people kind of turn their nose up. People automatically elevate PWIs because they’re white colleges and there’s this idea that a majority-white school is quality,” Williams says.

Williams, however, argues that institutions should be evaluated on a case-by-case basis.

In response to the question of why African-American students decide not to attend a HBCU, some PWI students point to name recognition — as well as the deficit of resources at such schools.

“I feel like you can pretty much go to every HBCU campus and you can say ‘UNC Chapel Hill,’ ‘Duke’ or ‘Yale’ and they’ll know exactly what you’re talking about,” says Joey Blake, a senior at the University of North Carolina-Chapel Hill.

“However — and I’ve definitely ran across this at UNC — talk to white students about different HBCUs and they won’t have any idea what you’re talking about. I feel like being on a PWI campus, as a black student, you kind of have that mindset ingrained to some degree. I think it does affect your perception of HBCUs from then on,” he says.

“If the endowments of all 105 HBCUs were added up, they’d still amount to less than 10% of Harvard University’s endowment, which at upward of $30 billion is the wealthiest of any college in the world.”

Beyond branding, UNC senior Matthew Taylor thinks additional hardships faced by HBCUs, including institutionalized racism, which manifests in things such as discriminatory public funding and a dearth of white benefactors, come into play.

“These systemic barriers have hindered HBCUs. General wealth is something that they just haven’t had,” Taylor says.

In an unsettling illustration of Taylor’s point, Essence published an article citing the gross imbalance in endowments between HBCUs and PWIs:

“If the endowments of all 105 HBCUs were added up, they’d still amount to less than 10% of Harvard University’s endowment, which at upward of $30 billion is the wealthiest of any college in the world.”

What HBCUs lack in economic resources, however, they often make up for in strong faculty support.

“It’s definitely a more loving environment. At an HBCU, you get a great connection with your professors,” Shank says.

Shank and Pickett also agreed that there is a general sense of affinity between black students at HBCUs that is not necessarily as prominent on PWI campuses.

So, what made these men both go on to PWIs?

They say they wanted to be well-rounded.

“I think we need to get to a point where we can move past the conversation of which is better and know that we’re all just trying to better ourselves.”

Jaleesa Jones is a senior at the University of North Carolina at Chapel Hill. Your typical underachiever, Jaleesa is working towards a degree in communication studies with a concentration in media studies and production as well as minors in journalism and screenwriting. She is the current President and Campus Correspondent for Her Campus UNC, a branch of HerCampus.com, the number one online community for college women. She is also an arts reporter for the Daily Tar Heel and a member of the Carolina Association of Future Magazine Editors. In her spare time, she enjoys listening to spoken word poetry, binge-watching Law & Order: SVU and debating everything from respectability politics to celebrity news. You can follow her random outbursts on Twitter @newLEESonlife.
This article comes from The USA TODAY College Contributor network. The views expressed in this article do not necessarily reflect the views of USA TODAY. You understand that we have no obligation to monitor any discussion forums, blogs, photo- or video-sharing pages, or other areas of the Site through which users can supply information or material. However, we reserve the right at all times, in our sole discretion, to screen content submitted by users and to edit, move, delete, and/or refuse to accept any content that in our judgment violates these Terms of Service or is otherwise unacceptable or inappropriate, whether for legal or other reasons.
Posted by PSC at 9:34 AM